Directions: In this section, there is a passage with ten blanks. You are required to select one word for each blank from a list of choices given in a word bank following the passage. Read the passage through carefully before making your choices. Each choice in the bank is identified by a letter. Please mark the corresponding letter for each item on Answer Sheet 2 with a single line through the centre. You may not use any of the words in the bank more than once.

The method for making beer has changed over time. Hops (啤酒花), for example, which give many a modern beer its bitter flavor, are a ? 26  recent addition to the beverage. This was mentioned in reference to brewing in the ninth century. Now, researchers have found a ??? 27  ingredient in residue (残留物) from 5000-year-old beer brewing equipment. While excavating two pits at a site in the central plains of China, scientists discovered fragments from pots and ve__ . The different shapes of the containers  28  they were used to brew, filter, and store beer. They ??may be ancient “beer-making tools,” and the earliest  29  evidence of beer brewing in China, the researchers reported in the Proceedings of the National Academy of Sciences. To  30  that hypothesis, the team examined the yellowish, dried  31  inside the vessels. The majority of the grains, about 80%, were from cereal crops like barley (大麦), and about 10% were bits of roots,  32  lily, would have made the beer sweeter, the scientists say. Barley was an unexpected find: the crop was domesticated in Western Eurasia and didn’t become a  33  food in central China until about 2000 years ago, according to the researchers. Based on that timing, they indicate barley may have  34  in the region not as food, but as  35  material for beer brewing.

Directions: There are 2 passages in this section. Each passage is followed by some questions or unfinished statements. For each of them there are four choices marked A), B), C) and D). You should decide on the best choice and mark the corresponding letter on Answer Sheet 2 with a single line through the center.

Questions 46 to 50 are based on the following passage.

Shoppers in the UK are spending less money on toilet paper to save money, research has shown.

Penny-pinching UK consumers choose cheaper products from discounters such as Aldi and Lidl rather than luxury alternatives.

This has wiped 6% off the value of the soft tissue paper market in the UK. It has shrunk from￡1.19 billion in 2011 to￡1.12 billion in 2015, according to a new report from market research company Mintel. Furthermore, the future of the market looks far from rosy, with sales expected to fall further to ￡1.11 billion in 2016.

In the last year alone, despite an increase in the UK population and a subsequent rise in the number of households, sales of toilet paper fell by 2%, with the average household reducing their toilet roll spending from ￡43 in 2014 to ￡41 in 2015.

Overall, almost three in five people say they try to limit their usage of paper-including facial tissue and kitchen roll-to save money. “Strength, softness and thickness remain the leading indicators of toilet paper quality, with just a small proportion of consumers preferring more luxurious alternatives, such as those with flower patterns or perfume,” said Mintel analyst Jack Duckett. “These extra features are deemed unnecessary by the majority of shoppers, which probably reflects how these types of products are typically more expensive than regular toilet paper, even when on special offer.”

While consumers are spending less on toilet paper, they remain fussy-in theory at least-when it comes to paper quality. Top of Britons’ toilet paper wish list is softness (57%) followed by strength (45%) and thickness (36%).

One in 10 buyers rank toilet rolls made from recycled paper among their top considerations, highlighting how overall the environment is much less of a consideration for shoppers than product quality. In a challenge for manufacturers, 81% of paper product users said they would consider buying recycled toilet tissue if it were comparable in quality to standard paper.

46. The market sales of toilet paper have decreased because .

A) Britons have cut their spending on it

B) its prices have gone up over the years

D) Britons have developed the habit of saving 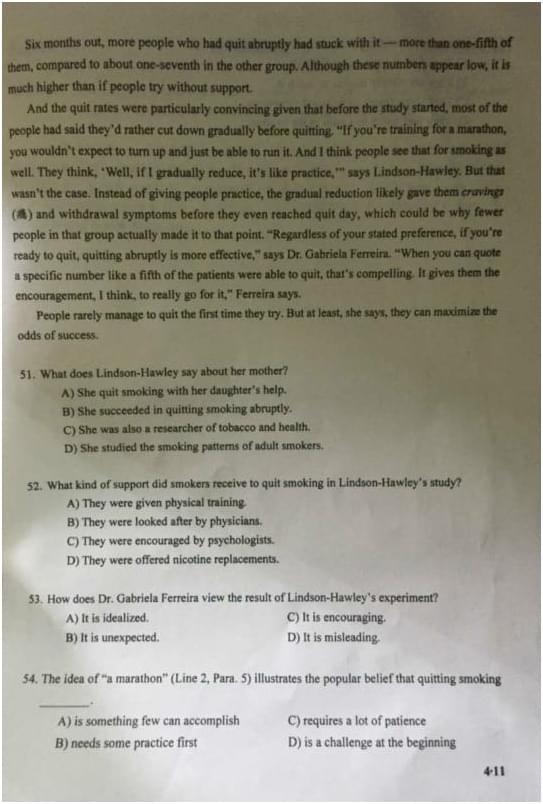